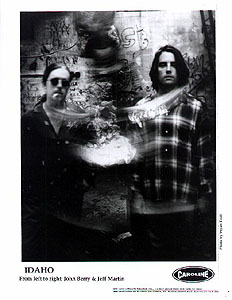 Welcome to Idaho--not the one in Idaho, the one in Los Angeles. Not the state, not the street, not the relict slogan for a mindless state or state-of-mind of the self-possessed, disembodied or baked. Idaho is the sound of a place in LA that's just down the block but way too far to walk, that you reach only by driving for hours and missing by miles. Or think of it as the soundtrack to a landscape buzzing out of register just yonder behind the screen, sewn together from the scraps of two sets of intersecting years spent navigating the streets and stucco rooms of a nirvana made spiritually putrid by The Industry, suburbs screaming with freeways, low-flying helicopters, and the crackling of idiot gunfire.
Idaho is not really one ex-con with a Marshall and one nice guy who plays piano beautifully, as you may have read. Idaho is not AC-DC plus Brian Eno at medium heat, but an abstraction drawn from two different, parallel experiences of a fractured city. John Berry and Jeff Martin have played together erratically for ten years, in nine bands, and share a range of influences from Darby Crash to Meat Puppets II, Richard Hell to Pavement, but they still don't agree, and their association is still erratic.
John grew up on the wrong side of the Hollywood sign, product of the 70's-80's punk rock scene, music and kicks eked out in the garages of friends' wierd, dissolute celebrity mothers, earnest experiments with the Nancy Spungen Diet Plan, and just enough Time in County. He has cultivated unhindered an urban vagrancy aided and abetted by an unregistered and warranted crimson Nova, an unprovoked enthusiasm for the wasted desert and suburban hinterlands of SoCal, a dour ecstatic insomnia inside smoky apartments walled off from the wretched landlord by accretions of stolen movie props, impromptu glass mosaics, and bags upon bags of unrecycled recyclables. A culture war, fought with guitars and the spaces between guitars. John in the mix of Idaho is both a raging and an anger and a resonance of very personal, oblique, polyphonic silence, which is I guess why we like him.
Jeff, with the Carruthers 4-string guitars that recall the piano chords that trained them, and the voice described as "dolorous" by those who might smell gloom in root beer fumes, is the one singing fairly joyous hymns to life. Which half is which of what is not obvious, because the parts overlap. Jeff seems the one without rage, with an ability to float, to strip things down to straight essences, but he here he has brushed a quieter strain of rage into a persian carpet, a luxurious simplicity, not flat, only appearing from a distance to be flat. It is not any credo of minimalism, just a careful architecture of textures, remembered and future bliss, a music that articulates the confusion, torment, ecstasy, and amnesia of the body more than Rock's private idaho likes to allow.
The generic Hollywood house where this all happens is covered with a purple morning glory vine gone rampant over the entire garage, three quarters of the yard, and several cars. Start with one thing in a gallon container, let the rain water it if it rains, and look what you get.